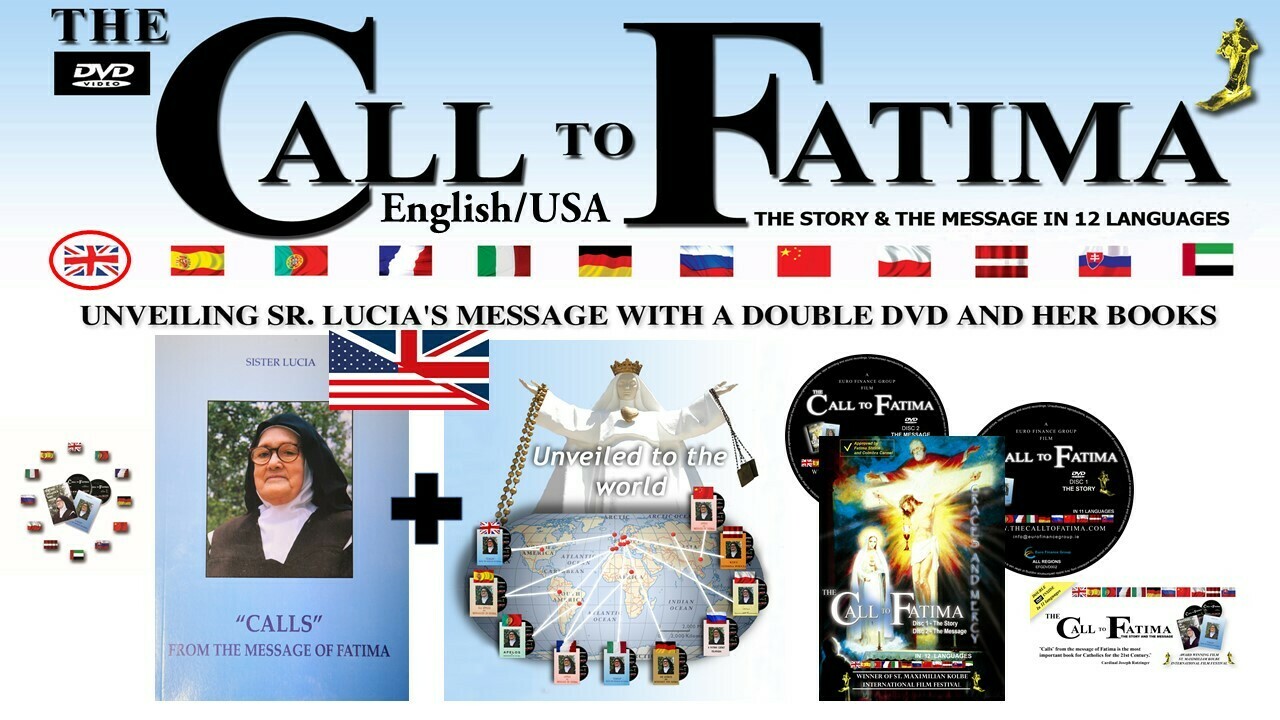 Donation to Educate World Leaders on the Fatima Message

The justification for this timely work (Without Prejudice)

Based on our experience over the last 20 years, many Catholics missed the central Fatima message, as nations built up a world without God and replaced Him for a “golden calf” culture. The net result, sooner or later the entire world will be on “Dunkirk beach”, spiritually speaking. Many Catholics ignored what Our Lady asked for in Fatima, namely, the daily Rosary and Five First Saturday Devotions. If Catholics did what Our Lady requested, we would have avoided World War II and over 50 million lives would have been saved

Servant of God Sr Lucia, the last visionary of Fatima, stated in her private diary with reference to the Third Secret of Fatima, was shown an Angel carrying a flaming sword shouting:

“Penance ! Penance ! Penance ! The tip of the spear as a flame unlatches and touches the axis of the earth. It shudders. mountains, cities, towns and villages with their inhabitants are buried. The sea, the rivers and clouds emerge from their limits, overflowing and bringing with them in a whirlwind houses and people in numbers that are not possible to count. It is the purification of the world because of sin as it plunges”. Sr Lucia. “A Pathway Under the Gaze of Mary”- Carmel of St Teresa Coimbra, Portugal -Page 244. Nihil Obstat and Imprimatur Rev Msgr Guerra / Bishop of Coimbra

The key word in this vision for us is sin. According to Sr Lucia taken from her book “Calls from the Message of Fatima”, the Ten Commandments is one of the central messages of Fatima (Page 207) and is approved by Congregation for the Doctrine of Faith in Rome. It is due to the breaking of these laws by each person and each nation, that will bring down God’s justice mentioned by Sr Lucia above.

This should be a final wake up call for the world: God has sent His Mother in 1917 and in 1929 to invite all to recite the daily Rosary and to do the Five First Saturday Devotions in order to receive the graces to repent, repair their lives and do penance. The Five First Saturday Devotions brings the laity and priests together once a month to receive the graces to withstand the spiritual attack against the family, against the Ten Commandments and against the Hierarchy of the Church in order to strengthen each individual and each nation against evil.

Many nations are still ignorant: Since 2005, our family continues to reach out to the laity around the world to help educate and spread the Fatima Marian devotions. The time has certainly arrived for the laity to be stimulated into action, as we hear more talk of unrest in the Far East, the Middle East and greater financial volatility looming around the corner. Many European banks face great financial turmoil with mountains of debt and should wars occur, this would certainly topple banks globally into ruin causing famine-like conditions and great loss of work. To avoid this, we must stop sinning and offending God. World leaders must know of the consequences of sin.

What can The Call to Fatima do? The time has come to educate all those in leadership with the Fatima message left behind by Sr Lucia. It is a blessing from God that the book and films are ready to reach out to 80% of the world’s leaders in 12 languages.

Who needs to be educated? The time has come to share the central Fatima message in their own language to Senators, Political Ministers, Kings, Queens, Religious leaders without prejudice, so that they can inform their citizens to stop breaking the Ten Commandments. According to Saint Jacinta Marto, the sins of the flesh offend God the most.

By God’s Grace and providence, we saw all this turmoil coming thanks to Sr Lucia and Our Lady of Fatima. Families, priests, nuns and laity put in place this religious educational material to support those in spiritual need. With the blessing of Saint Pope John Paul II, Pope Benedict XVI, Pope Francis and the Poor Clare Sisters in Dublin for our contribution on spreading the Fatima message, we are inviting donors and volunteers to help us to educate leaders of the five continents of the world in their own language and to leaders in their own community.

We are reminded that it was the small boats from England that came to France to rescue 400,000 troops on Dunkirk beach during WWII. We feel it will take the laity, holy priests, nuns and brothers to save those who are in grave sin for our time. The true enemy is Satan, not people, but people have gone astray and they need those in faith to bring them back from the brink. The root cause according to Servant of God Sr Lucia for all suffering (war, famine, greed, hatred, murder, idolatry, adultery, sins of the flesh and vices of all kind etc..) is sin, which will bring down God’s justice.

“God has created me to do him some definite service; he has committed some work to me which he has not committed to another. I have my mission.” Saint Cardinal John Henry Newman This sums up our work. We are a family of seven placing all our trust in Divine Providence. We have supported the laity and priests since 2005 to carry out this timely and urgent request by Our Lady of Fatima. We simply educate families, schools, priests, lapsed Catholics and those of no faith: using Sr Lucia’s books and our films -see Fatima Bookstore https://calltofatima.ecwid.com. We have arrived to the conclusion that we also need to reach out to world leaders to highlight to them on the consequences of sin. Our work first started on the 13th May 1999, not knowing the full implication what it all meant at that time. It was a small step in faith, hope and love back then and we had to learn to trust God on the journey. Trusting God was the hard part for us, as many times our family felt lost and abandoned. The light in the tunnel is much brighter now and this light (the Fatima message) must appear on top of a hill for all to see.

We beg you to respond to our “Call to Fatima” donation appeal: As a family, we accumulated knowledge when converting the last visionary of Fatima writings into a two-part film documentary titled: The Call to Fatima in 12 languages. Sr Lucia is warning all of mankind to stop sinning and offending God. We wrote to alert President Donald Trump and the First Lady, but we need to alert G7, G20, UN and 7,500 world leaders about the great suffering due to sin. We will invite TV / Radio / Print media to alert nations. This urgent donation appeal will help us to deliver the central message of Fatima left behind by Sr Lucia to all world leaders in their own language.

What will your donation achieve? Your donation will allow us to purchase large quantities of Sr Lucia’s book Calls from the Message of Fatima (in 11 languages) which will include 2 DVD’s The Call to Fatima (in 12 languages) plus all the relevant print material including packaging and postage. The book and films will be sent to 7,500 world leaders. No work can be carried out without your donation.

How can I help? You can donate, start a local community initiative, place our links on your social media pages, write a few paragraphs for local newspapers, approach trusted family and friends to send a donation online to https://www.paypal.me/calltofatima or drop a cheque in any currency by post or by electronic transfer or leave a donation in your will. If you know of persons who would be open minded to support this appeal, please share this information with them Please. Keep in mind, all the work (books and films) already completed thanks to so many souls who have already gone to their eternal reward.

Why Now? Like the story of Nineveh in the Bible, Jonah was sent by God to warn their King and the city was saved. Nineveh is Mosul in modern day Northern Iraq today. Fatima carries a similar warning asking us to “Repent, repair your life, and do penance”.

What will world leaders receive? We are blessed to have “Calls from the Message of Fatima” and “Fatima in Sr Lucia Own Words” and “The Call to Fatima films” in 12 languages to send to over 7,500 world leaders with your donations. A donation of €25 will educate one world leader in their own language. Imagine it will be your donation that made it happen for English, Russian, Arabic, Italian, Hungarian, Spanish, Italian, German, Portuguese, Latvian, Slovak, Polish and Chinese leaders.

Each donation will help the work in earnest.

We are not starting without you

Reference Quotes: “What is it that makes your strength ineffectual and halts you with fear in the face of the great attack of my Adversary? It is the tolerance of sin which draws you away from the life of my Son Jesus.” The Hour of Public Witness # (313). To the Priests Our Lady’s Beloved Sons, by Fr Gobbi-Marian Movement of Priests

“Let us not wait for God’s justice which nations deserve due to sin, instead together take a proactive approach by educating leaders to “leading all souls to Heaven, especially those most in need” so that many graces can flow for each citizen and for each nation.”Thomas and Solvita McCormack The Call to Fatima

“The seat of St Peter is in Rome, but the school of Mary is in Fatima” Pope Benedict XVI

“Calls from the Message of Fatima by Sr Lucia is the most important book for Catholics for 21st Century”.

Why world leaders are more worried view links below?

Fr Apostili /Why the Rosary:

Donation by Post please send a Cheque / Postal Order to:

Spreading the Fatima message around the world in 12 languages after  the death of Servant of God Sr Lucia on the 13th February 2005.

The Call to Fatima promotes all of Sr Lucia's writings and with each of her books comes two DVD's from The Call to Fatima also in 12 languages.  The work is unique since many who knew her personally have sadly gone to their eternal reward.

It is available in Chinese 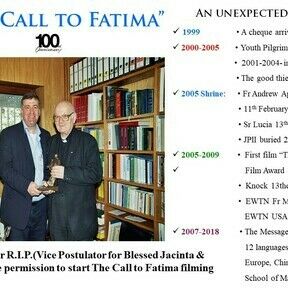 Director and Producers and authors

We spent 20 years sharing the Fatima message left behind by Servant of God Sr Lucia. Who died on the 13th Feb 2005

The world is now heading in the wrong direction spiritually and we are inviting all to help us spread the Fatima message by purchasing the books, films and CD's in many languages around the globe left behind by Servant of God Sr Lucia.