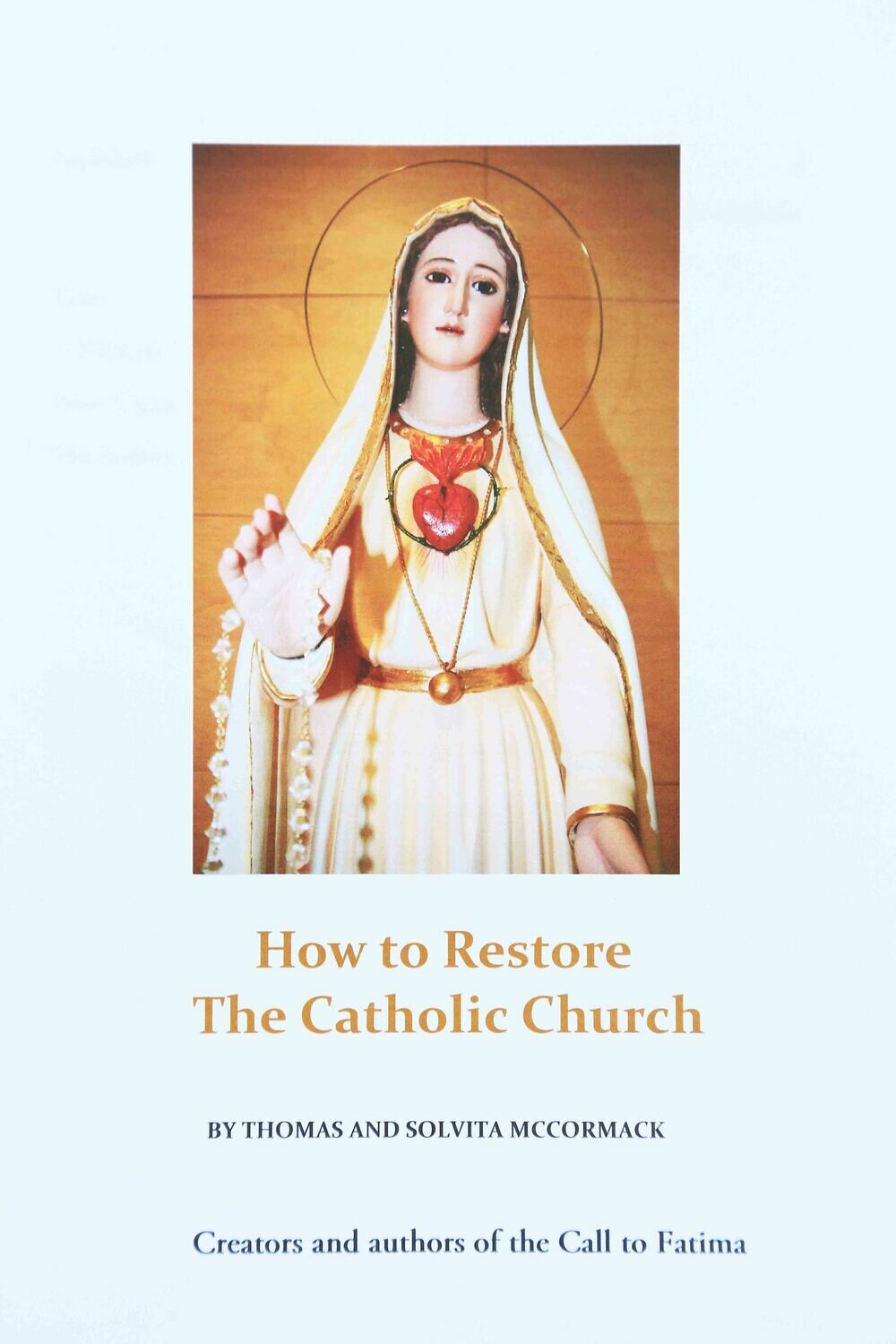 Book version How to Restore The Catholic Church

© The Call to Fatima and How to Restore the Catholic Church

Title:How to Restore the Catholic Church

The Authors:Thomas and Solvita McCormack

Sample of the book preview

Open Letter to The Pope

The Problem and the Solution

Thank you for your inspiring remarks in front of over one million during world youth day in Poland in 2016. "Dear young people, we didn't come into this world to 'vegetate,' to take it easy, to make our lives a comfortable sofa to fall asleep on. No, we came for another reason: To leave a mark."....."It's true, there are many temptations, weaknesses in life and we should try to do something about them." Our open letter to you is to put into action, ‘the School of Mary’ into the hands of all Catholics with some urgency to save all souls.

As you know, three little children Lucia, Jacinta and Francisco were given in Fatima the peace plan from Heaven for the entire world in 1916 and 1917. One hundred years later, it is true to say the Heavenly peace plan, based on the many wars and disobedience against the Commandments, was missed. We continue to invite Bishops, priests and the laity to come off their ‘comfortable sofa’.

Saint John Paul II echoed a similar warning on the 13th May, 1982, a year after the attempt on his life in St Peters Square, he came to Fatima and said “If the Church accepted the message of Fatima, it is above all because it contains a truth and a summons which are in essence the truth and the summons of the Gospel itself”. The word “If” in Pope John Paul II’s statement is very telling, because he must have known in 1982 that many Church authorities and the laity would ignore the central message of Fatima namely to stop offending God.

Many Nations today has half empty churches and even less use of the confession boxes. The sad divisions between Bishops, Archbishops, Priests and the poor state of some seminaries requires great spiritual healing. The sin of presumption is alive and continuing to grow globally. Pagan Nations are flourishing, Catholics are isolated and ‘removed’ from the public square.

These Times Were Foretold

These times were foretold in Fatima, through the voice of the Angel, who appeared to the children to whom he taught this prayer: “Most Holy Trinity, Father Son and Holy Spirit, I adore you profoundly, I offer you the Most Precious Body, Blood, Soul and Divinity of Our Lord Jesus Christ present in all the Tabernacles of the world, in reparation for the outrages, sacrileges and indifference by which He is offended. By the infinite merits of the Sacred Heart of Jesus and the Immaculate Heart of Mary, I beg the conversion of poor sinners”.

Today Jesus is surrounded by emptiness, indifference and sacrileges in many nations. It can be said that there is no Eucharist Mass celebration where sacrilegious Communions are not made. Either all those who go to Mass are saints and have no need for confession or those who do go without going to confessing are making sacrilegious Communions. But even saints went often to confession. Seldom do you hear a priest remind the flock to approach the altar with a clean heart renewed in the confession before receiving Holy Communion. Whatever the reason, sacrilegious communions are carried out at most Masses.

Millions of Catholics refuse to attend weekly Sunday Mass with their children. This is the indifference the Angel referred to in the prayer above. Our Lady of Fatima asked us to say between each decade of the Rosary “O My Jesus, forgive us our sins, save us from the fires of hell and lead all souls back to Heaven, especially those most in need”.Who are those most in need? First the Bishops and Priests are in need. If they continue to carrying on as before by their silence to speak the whole truth, they will carry a grave sin of inaction on their soul when they meet their final end if they do not repent. The same applies to Mothers and Fathers who fail to live the Catholic faith or pass on their faith to their children. The same applies to politicians who militate against God’s law of Love. The same applies to teachers who water down or not teach the faith according to the teaching of the Catholic Church.The same applies to the law makers who make unjust laws on family marriages. The same applies to Judges, barristers and solicitors who every day militate against marriage in the family courts and for the medical profession who desire for the sake of ‘equality and the right to choose’ in their heart to carry out abortion and euthanasia on demand.

Jesus told St Faustina in 1946: "In the Old Covenant I sent prophets wielding thunderbolts to My people. Today I am sending you with My mercy to the people of the whole world. I do not want to punish suffering mankind, but I desire to heal it, pressing it to My Merciful Heart. I use punishment when they themselves force Me to do so; My hand is reluctant to take hold of the sword of justice. Before the Day of Justice I am sending the Day of Mercy. [Diary of St Faustina, #1588] “I am prolonging the time of mercy for the sake of sinners. But woe to them if they do not recognize this time of My visitation” [Diary of St. Faustina, # 1160].

We studied Our Lady’s request at Fatima for many years and the time has arrived to formally invite all Bishops, Priests, parents and teachers to read, learn, live, protect and spread what Our Lady requested at Fatima and Pontevedra in Spain. This is what must be done to restored the Catholic Church in order for the Fatima message to bring about a return to the faith:

Many Bishops and Priests are going after things of lesser and more secondly importance, forgetting that the centre of a priestly life must be before the Tabernacle, where Jesus is present and is kept for all. It is in the Eucharist that the entire strength for the Church will see the complete renewal in each nation.

The mandate is clear from Our Lady of Fatima. The Mother of God wants all souls to be saved. Our Lady came in 1917 to warn us of the great suffering if we did not heed her warning. The Child Jesus reminded Sr Lucia again on the 26th February 1926 to remind the Church to promote the devotion Five First Saturdays.The urgency of the hour is close and the dark clouds are gathering. God’s final justice is due to our sinful pride of disobedience against the Ten Commandments and do not be surprised if the rich and the poor walk the streets and famine return to many so called advanced nations. Do not be surprised to see money fall, sins of the flesh of all kinds fall and man’s pride fall due to the weight of our sins that offend God.

Time each Catholic to make their Mark

The four last things as you know are Death, Judgement, Heaven or Hell. There is no question in our minds as they stand today, millions of Catholics are in grave danger of the latter unless they repent for their disobedience of the Ten Commandments, repair their lives and do penance. We invite the Bishops, Priests, parents, school teachers and the laity in general to respond to Our Lady of Fatima’s request. Then the Mother of God will crush the secular culture that is openly trying to replace God in each nation. We invite you Holy Father to ask our Bishops, Priests, parents and teachers to finally grasp the opportunity to honour Our Lady of Fatima’s request to save souls.

The apparition on the 13th June, 1917, Our Lady said that Lucia would “stay on earth to establish devotion to her Immaculate Heart”. Our Lady told Sr Lucia: “I promise salvation to those who practice it”.

In 1925, Our Lady returned to Pontevedra in Spain with the great gift of the Five First Saturday devotion for Catholics to practice and told Lucia, “My daughter, look at My Heart surrounded with the thorns with which ungrateful men pierce it at every moment by their blasphemies and ingratitude. You, at least, try to console me, and say that I promise to assist at the hour of death with all the graces necessary for salvation all those who, on the First Saturdays of Five consecutive months, recite five decades of the Rosary and keep me company for a quarter of an hour while meditating on the mysteries of the Rosary, with the intention of making Reparation to me”.

What a mark on history it would be if each Catholic finally got of their ‘sofa’ and carried out the wishes of Our Lady of Fatima for the next one hundred years! Servant of God Sr Lucia has left behind a message with her book “Calls from the Message of Fatima”, that needs to be made known, read, viewed and lived by all Catholics. What we propose might sound impossible that all must read the book and to live the central message of Fatima. Let us remind you what you once said after becoming Pope:

“Do not bury your talents

Do not bury the gifts that God has given you

Do not be afraid to dream of great things”